I was awakened by a dream-boy attacking me, trying to kill me with scissors. [I know, gross. Stick with me. There’s a point here.]

Aren’t you glad that’s how it happens (most of the time)? We wake up before the scene gets too bloody, before our free-falling body hits the sidewalk. Before death.

My dream-boy was dreamy until I asked him, “So, what do you think of Jesus?”

That’s when his eyes filled with hatred. That’s when he pulled the scissors out. That’s when I woke up, not afraid (surprisingly)…but, stunned at the vivid picture, which I had the strong impression was spiritual. This seemed to be confirmed when I unintentionally read John 16:2 the next morning— “The time is coming when anyone who kills you will think they are offering a service to God.” I didn’t read any personal prophesy into this, but took it as a reminder that people either love or hate Jesus. And that often means they will either love or hate His followers.

I thought about a passage I recently spent time with, Acts 17:16-34. Paul goes to Athens and talks about God with Jewish people, God-fearing Greeks, and philosophers. Much has been said and can be learned from this passage, but one thing that especially stood out to me was this: The resurrection of Jesus is where the rubber meets the road. My dream-boy was fine until the mention of Jesus. When Paul speaks about the resurrection of Jesus to the people of Athens, some sneer, some seek, and some are saved there and then.

And no wonder! The gospel hinges on the power and authority of God to defeat sin and death as displayed in the resurrection. Paul says that if Christ did not rise from the dead, our preaching is useless (1 Corinthians 15:14).

Every SOUL hinges on the resurrection of Jesus.

When we accept the death of Jesus on our behalf, when we accept that He rose from the grave, and follow Him as Lord, something miraculous happens: WE are raised from the dead.

And something else peculiarly miraculous happens: we’re able to die. We’re invited to die in a way that’s ONLY POSSIBLE through the resurrection of Jesus. We’re invited to allow the Spirit of God to breathe life that puts to death the death in us— to eradicate the brokenness that prevents us from living lives filled with the love and grace of God— our selfishness, our pride, our lust.

Wait, wait, wait. So what about my dream-boy-gone-stab-happy? Sometimes the whole “death to self” thing can seem separate from outward suffering for Christ— whether that looks like battling cancer in faithfulness to Christ, waking up extra early in faithfulness to Christ, or persecution and martyrdom in faithfulness to Christ. But the two are closely connected: If we haven’t died to ourselves, we’ll never be able to truly suffer for Christ or with Christ. We’ll suffer the big and small alright, but when we don’t surrender to God in our suffering, we miss out on intimacy with God and honoring Him with our circumstances.

Two days after my dream, I went searching for verses on prayer. I was looking in Acts and my eyes wandered over to the end of John (chapter 21) and Jesus’ conversation with Peter:

Jesus responds, “Feed my lambs.” “Take care of my sheep.” “Feed my sheep.”

Then, then Jesus says, “Very truly I tell you, when you were younger you dressed yourself and went where you wanted; but when you are old you will stretch out your hands, and someone else will dress you and lead you where you do not want to go.”

The tears came loose while I read. I pictured young Peter, in love with Jesus and also heartbroken about his previous failure, aware of his need and yet being commissioned— I pictured Peter, old, bent over from years of feeding the Flock, being dressed by someone else, being led where he does not want to go…to his own crucifixion.

As I saw him, used by God’s grace, surrendered, glorifying God as he was led to another rugged cross….I heard Jesus’ words: “You are Peter, and on this rock I will build my church, and the gates of Hades will not overcome it” (Matthew 16:18).

One whose life ended so like Jesus’, on a cross— the rock the church is built on.

An old man, dressed by others, his arms outreached…the rock.

My heart was breaking in the pain of it and the glory and the reality of what the church is built on— ultimately THE Rock (the crucified and risen Jesus), but also those crucified and risen with Him. Crucifixion is part of the story of each Christ-follower— of every living stone (1 Peter 2:5) that makes up the church.

Paul’s words fill me with wonder at the power of God. They fill me with bravery and confidence. CHRIST lives in me. I’ll proclaim it and proclaim it again with down-to-my-toes gratitude— my flesh is dead and my soul is alive because Jesus lives. I can be led wherever God wants to take me— even to places I do not want to go— because Jesus drank the cup He did not want to drink…and yet drank for the joy set before Him: The wrath of God meant for me.

I can, for the joy set before me, endure the cross because the Son of God defeated death and hell when He rose from the grave. Because He lives, sweet unity awaits me.

In John chapter 8, we read about a hard conversation Jesus had with some Jewish people (potentially a mixture of Pharisees and laymen). The people he was speaking to likely studied the scriptures, prayed, and followed the Law to varying degrees…however, their core issue was deeper than outward actions. Jesus said to them, “I know that you are Abraham’s descendants. Yet you are looking for a way to kill me, because you have no room for my word” (John 8:37).

I forget that my Savior, in all His goodness and mercy, truly seeks to SAVE ME and that my fear should be a joyful, trembling, awe-inspired fear that draws me nearer to His light.

When I seek to increase my sense of self-righteousness, I leave no room for HIS righteousness.

When I seek to solely increase my knowledge, I leave no room for His peace that passes understanding.

And, the opposite is true— when I sit in the presence of God, with my hands and heart wide open to receive Him, He grants me His strength to walk in paths of righteousness, He grants me His indescribable peace, and He corrects my thoughts and makes them obedient to His good, perfect, beautiful will.

Jesus died not to make us good people or solely to save us from Hell, but to be with us and transform us through intimacy with Him!

In the words of Isaac Watts, “Let every heart prepare Him room.” 🙂 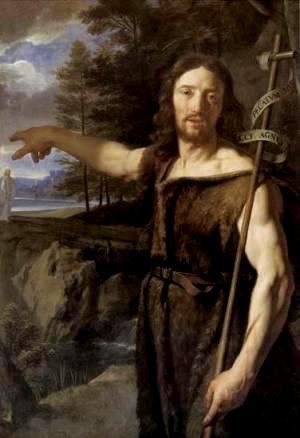 If you are one of the many men and women who are participating in the international, interdenominational Bible study BSF (Bible Study Fellowship), the title of this post probably sounds familiar. This past week we studied the third chapter of John. In this chapter, we read about Nicodemus’ nighttime conversation with Jesus. Then, about John the Baptist’s embrace of the role God gave him. John 3 is packed with such rich truth about the problem man faces and Jesus’ loving solution— in other words, the condemnation of sinful man and salvation through Jesus.

After giving an account of Nicodemus’ interaction with Jesus, which ends with Jesus telling Nicodemus that He will provide salvation from sins and eternal life, the Apostle John further explains:

For God did not send His Son into the world to condemn the world, but to save the world through Him. Whoever believes in Him is not condemned, but whoever does not believe stands condemned already, because they have not believed in the name of God’s one and only Son. This is the verdict: Light has come into the world, but people loved darkness rather than light because their deeds were evil. Everyone who does evil hates the light, and will not come into the light for fear their deeds will be exposed. But whoever lives the truth comes into the light, so that it may be seen plainly that what they have done has been done in the sight of God. (John 3:17-21, emphasis added)

When we put our trust in Jesus, we are not condemned! We have eternal life! Such comfort and true freedom from fear can be found in these truths.

The above passage should transform my thinking:

We see clearly that GOD has the power to condemn or acquit.

We see that mankind’s tendency post-fall is to LOVE THE DARKNESS.

Recently I was in a conversation with someone and began to feel guilty about doing something the Lord clearly commands us to do. I felt that I needed to start covering it up…I became so afraid that this person would think poorly of me and of my husband.

This fear and shame is such a deception of the Devil.

But, it’s more than that— the fear and shame is also a symptom of not resting fully in the salvation and authority of Christ…of allowing the opinion of man to have sway over me in areas where only Christ should.

In studying John 3 this week, I was both convicted and comforted. In the BSF notes for this chapter, a question is posed in relation to John the Baptist’s actions: “Do I lead people to love me or to love Jesus?” My undue fear and shame are evidence that I am more concerned about people loving me than loving Jesus.

If you know the story of John the Baptist, you know we have many examples of John not being swayed by man. Ultimately, John would be beheaded— talk about not being a people pleaser.

When Jesus started baptizing, this meant that fewer people went to John the Baptist to be baptized— if he were concerned with people loving him more than he was concerned with people loving Jesus, he would have been upset by this. And, his disciples were. John explained to them once again that Jesus was the Messiah, not him. John was simply an attendant, meant to help bring the bride to the Bridegroom (Jesus). Now that the Bridegroom had arrived John said his joy was complete and told his disciples “He [Jesus] must become greater and I must become less.”

As Jesus becomes greater and we become less—as we focus on leading people to love Jesus rather than ourselves—our fear of man will diminish and we can live freely in the JOY of salvation.

Sure, men could behead John, but they couldn’t kill his soul.

Sure, we can be judged “guilty” by men, but they cannot condemn our souls.

Remember, Jesus was judged “guilty” by men. Judged a blasphemer. Yet, through him all LIFE and SALVATION has been granted us!

May we boldly and joyfully walk into the light out of love for the Lord and pray that others will as well:

“Whoever loves the truth comes into the light, so that it may be seen plainly that what they have done has been done in the sight of God” (John 3:21).